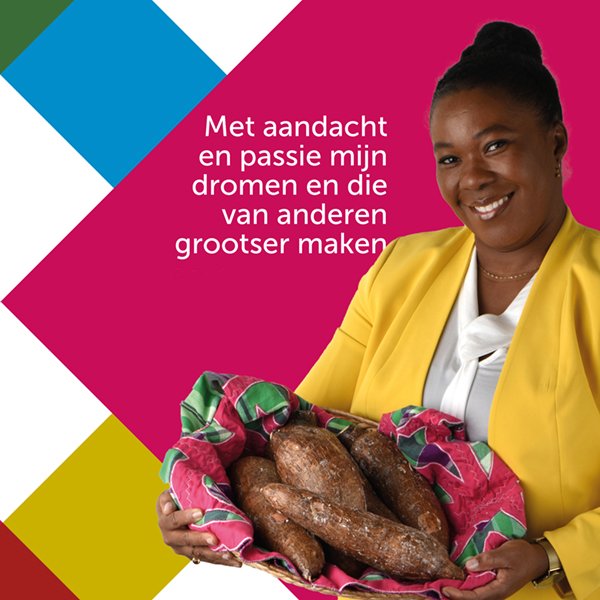 Creates a strong network through knowledge, opportunities and cassava.

October 10 – Day of the Maroons
The struggle of the Surinamese Maroons against oppression and for freedom has been celebrated and commemorated since 2010. October 10 is Day of the Maroons and that is the national holiday that Diana celebrates every year. She explains: “My parents moved from District Marowijne to Paramaribo in the early 1960s. I was born and raised here as the youngest of a large family. My parents loved the Maroon culture. That included working on the land. We had a piece of land just outside Paramaribo. We went there every weekend.”

To dream
Once an adult, Diana moved to the Netherlands. Making a living here proved difficult. After many applications she was able to get started, although far below her level, but she had work. And dreams too. That’s how she got the idea to do more with cassava. It used to be the carrot that fed entire communities, why not now? Diana: “Certainly now that consumers are open to exotic products and cassava is becoming increasingly important in the world food market. This is a win-win situation for everyone: plenty of opportunities for small farmers in Suriname and a healthy market in Europe for this superfood.”

Two sides
With the cassava, she gives her foundation Talitha Arise a face that cuts both ways: she helps her connections in Suriname and she wants to ensure that the cassava will bring employment in the Netherlands. Dream come true, mission accomplished? No, this is just the beginning. “I will continue for the people who need a chance.”